How Old Do Kittens Have to Be to Get Fixed? 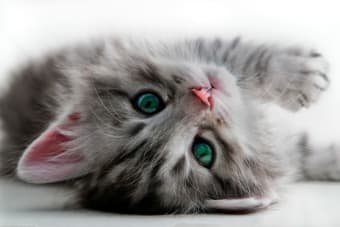 If you have recently acquired a kitten then there will be a variety of preventive care that they will need, including being fixed to avoid unwanted litters and serious diseases. Our Pittsboro vets discuss the benefits of having your cat spayed or neutered and how old your kitten needs to be to get fixed.

Should you get your cat fixed?

Approximately 3.2 million cats enter US animal shelters every year according to the ASPCA (American Society for the Prevention of Cruelty to Animals).

The absolute best way to help reduce the number of unwanted cats in Pittsboro area shelters is by spaying or neutering your cat.

But the benefits of spaying and neutering your pet doesn't stop at population control. Getting your kitten fixed could help to curb many undesirable cat behaviors and help to reduce the risk of your cat developing a number of serious health conditions.

What is the difference between spaying and neutering?

When we talk about getting a companion animal 'fixed' we are using a blanket term that covers both the spaying of female animals and the neutering of male animals.

When a cat is spayed, the uterus and ovaries, or sometimes just the ovaries, of the female cat are surgically removed.

After your cat has been spayed, she will not be able to have kittens.

Neutering, or castration as it is sometimes called, involves the removal of the male cat's testes.

Having your male cat neutered will prevent him from fathering kittens.

Benefits of Spaying Your Female Cat

Not only that, female cats can have as many as four litters a year. When we consider that the average litter can range in size from two kittens (from a young mother) to as many as ten kittens, that is a staggering number of unwanted cats.

Spaying your kitten before she has her first heat can help to reduce her risk of pyometra (infection of the womb) as well as mammary tumors. It's also important to note that female cats carrying infectious diseases can pass serious conditions on to their kittens who go on to spread the disease even further. Pregnancy and the birth process can be risky for young cats, and costly to their owners.

It is estimated that cats in the USA kill between 1.4 billion and 3.7 billion birds each year. Keeping the number of homeless cats to a minimum can help save countless birds' lives and other wildlife.

Female cats who are not spayed will go into heat frequently throughout the year, attracting male cats from across the neighborhood to your home and garden. Unneutered male cats prowling around your property, looking for your female, can be problematic since these males have a tendency to spray, fight and caterwaul. Spaying your female cat can help to keep male cats out of your backyard.

Benefits of Neutering Your Male Cat

While male cats don't actually have kittens themselves, one unneutered male cat in your neighborhood can make many female cats pregnant. That's why neutering male cats is as important as spaying females when it comes to population control!

Neutering your male cat may help slow the spread of serious cat diseases such as Feline immunodeficiency virus (FIV) and Feline leukemia virus (FeLV) that are often spread between cats during fights. Neutering can help to reduce cat aggression and may mean fewer injuries from fighting. Neutered males also tend to stay closer to home which helps to reduce their risk of being injured by vehicles.

Unneutered male cats spray inside the home more than neutered males and may be aggressive toward their owners. Having your male kitten neutered while young can help to prevent these behaviors from starting. Also, male cats who are not neutered, frequently roam over large areas in search of unspayed females to mate with. These males will spray to mark their territory and often fight with other male cats which can be bothersome, noisy, and smelly.

When Should You Get Your Cat Fixed?

In general, most vets recommend having your kitten fixed sooner rather than later. Typically this procedure is performed when your kitten is between 8 and 12 weeks old.

Our Pittsboro vets suggest scheduling your female kitten's spay procedure before their first estrus in order to help minimize the risk of unwanted litters of kittens as well as prevent a variety of diseases that could affect them later in life, some of which are potentially life-threatening.

Your vet will know when is best for you to have your kitten spayed or neutered and can help prepare you for what to expect during and after the surgery has been completed.

Note: The advice provided in this post is intended for informational purposes and does not constitute medical advice regarding pets. For an accurate diagnosis of your pet's condition, please make an appointment with your vet.

To find out more about getting your kitten spayed or neutered, contact our Pittsboro veterinary clinic today for more information or to book an appointment.

Our vets at Hope Crossing Animal Hospital are now accepting new patients! Our talented veterinary team is passionate about caring for the pets of Pittsboro. Contact us today to book your first appointment.